Bed Bugs Are an Increasing Problem

Bed Bug infestations in the United States have increased at an alarming rate in the past few years. More than 1,000 pest exterminators were recently surveyed and 95% stated they had dealt with a bed bug infestation in the past year. This is up from 25% in 2000. Most Americans have little understanding of bed bugs and lack of education may be part of the problem. Popularly held misconceptions, such as thinking bed bugs are caused by poor housekeeping or hygiene or that they are only in poor neighborhoods, can prevent people from taking proper precautions. In reality, bed bugs are attracted to anyone who is warm blooded and can provide a meal. They travel freely between living units and can be transported building-wide and building to building by human activity. Even after treatment, without proper precautions, bed bugs can return. A key factor in stopping their life cycle is being able to locate the tiny white eggs and destroy or remove them before they hatch.  A female can lay 2-7 eggs per week throughout her lifetime.

Bed Bugs Do Not Discriminate

People mistakenly associate bed bugs with clutter and filth. However, bed bugs can be anywhere and have been found in the finest hotels and living accommodations. The prevalence of bed bugs in low income housing is not a result of the bug’s preference, but of dense populations and lack of resources to pay for proper elimination. Bed bugs prefer a climate that is also comfortable for humans. To reduce your risk of infestation, thoroughly check any used bedding, furniture, and books before bringing it into the home. When traveling, inspect bedding before use for signs of bugs along the seams of mattresses and box springs. Use a flashlight to look for blood spots (fecal matter), bugs or nymphs, and take note of any smell similar to over-ripe raspberries. Also check the headboard and any pictures hanging near the bed. Keep suitcases elevated on luggage stands away from the bed and other furniture.

Bed Bugs Are Not Just Found in Beds

In recent years, bed bug infestations in homes, churches, retirement communities, movie theaters, hotels, residence halls, libraries and airports have increased. Although a specific explanation for the resurgence of this pest is not known, increased travel and pesticides with reduced residual activity have probably contributed. Bed bugs travel in suitcases, purses and backpacks, on pets, in books, and on people.  Bed bugs do not like heat so they are more likely to travel on items that are farther removed from our bodies. They spread away from beds into living areas and can be found on any surface.  Bed Bugs are expert hiders and generally just come out to feed.  Often they come out at night when they are less likely to be disturbed while feeding.  They are attracted to the carbon dioxide we exhale. After feeding they will retreat to creases in the mattress, behind baseboards, in cracks in furniture, under carpet and even in electrical outlets and telephones-- basically anywhere they can find a crack or crevice in which to hide.

Because bed bugs are secretive, they are difficult to detect, especially in the early stages of infestation. They often feed multiple times before people have time to realize it. By then, females have had plenty of time to deposit eggs to increase the population. Bed bugs are attracted to the carbon dioxide in our breath so they generally feed at night when people are asleep, but the bite usually is not noticed until later. Reactions to the bites vary and can be difficult to distinguish from mosquito, flea or spider bites. Because of how bed bugs feed, the bites are generally arranged in a line. Some people have no reaction to the bites, but many have an allergic response such as itching and small welts.

Both bed bug nymphs and adults typically feed at night but hide in nearby cracks and crevices during the day. Their small size and flattened bodies make it easy for them to hide in seams of mattresses, under loose wallpaper, in electrical outlets, under baseboards, in other furniture and even in phones. They are difficult to see without dismantling the bed or furniture and using a flashlight. Eggs are clear and very small so will likely require magnification to be seen. 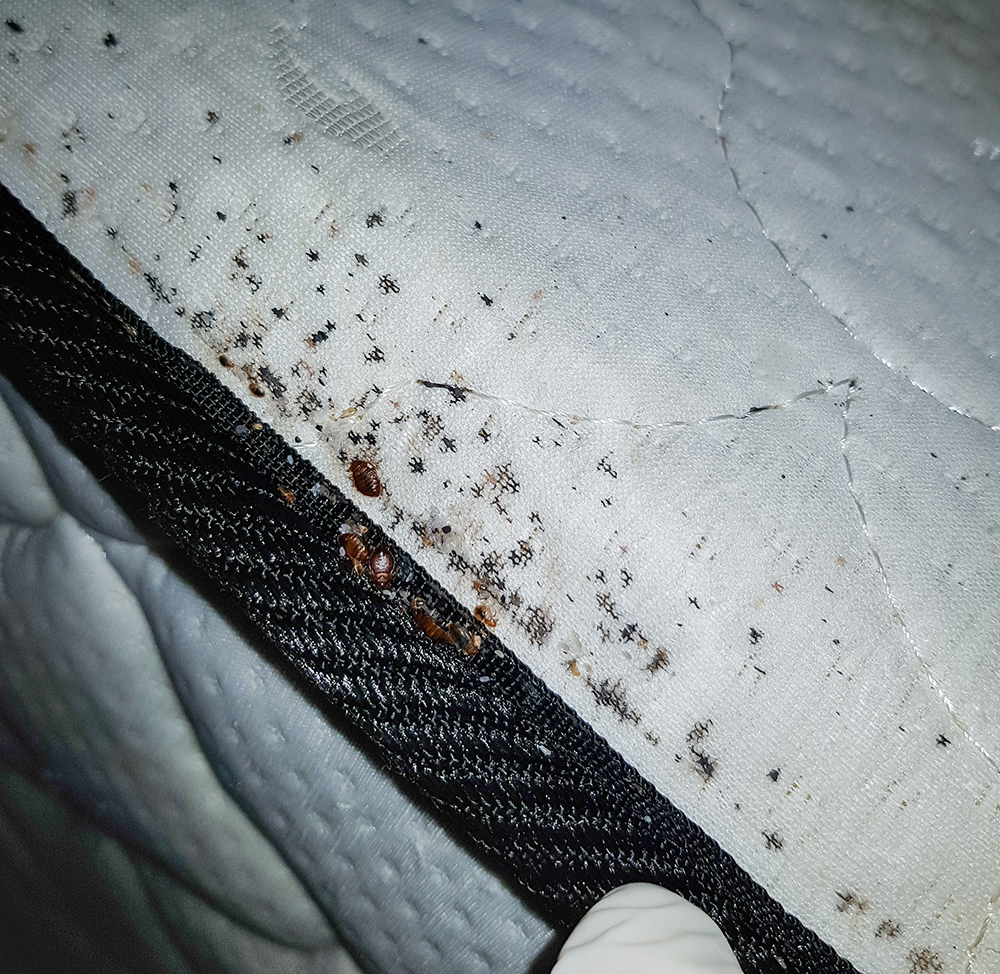 Adult bed bugs are small, oval, wingless, flattened insects of about 1/5 inch long and rusty to dark red in color. They have four-segmented antennae and small, compound eyes located on the sides of the head. Immature bed bugs, or nymphs, are similar in appearance to adults, but smaller. A female bed bug can produce  500 eggs in a lifetime, generally laying 2-7 eggs per week. She can lay eggs throughout her lifetime solely as the result of one mating occurrence. Eggs are tiny, white and deposited in clusters of 10 to 50. They are covered in a glue-like substance that allows them to adhere to surfaces, often long after nymphs hatch. Newly hatched nymphs are about the size of a grain of salt and a light yellowish color, making them difficult to detect. Nymphs grow larger after each of five molts before reaching adulthood. They require a blood meal before each molt. The complete life cycle can take anywhere from five weeks to four months. They develop rapidly under ideal conditions (70-82 degrees F). Controlling an infestation by temporarily abandoning a dwelling is not effective because both nymphs and adults can live for months without feeding and although they prefer humans, they can feed on other warm-blooded animals.